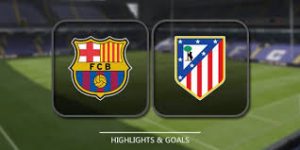 Barcelona welcomes Atletico Madrid in the big derby of the 27th round of the Spanish La Liga. Against each other we will see the first and the second team in the La Liga standings.

Barca are leading the table with 66 points, while Atletico Madrid have 5 points less on the second place. For Atletico this is an opportunity to decrease Barcelona’s advantage on the top. But in same time, for Barca it’s a chance to increase their lead. In other words, this game is very important for both clubs.

Barcelona are leading the La Liga standings with 66 points and a record of 20 wins and 6 draws. The Los Cules are the only unbeaten team in the league since the beginning of the season. It will be really impressive, if they finish the season without a loss conceded. Can they do it? Most surely they can, they are good enough to do it.

In their last five games Barcelona won just twice and made three draws, including against Las Palmas in the previous round. Maybe this is a sign that Barca are a little bit shaky in the last month, but they are still convincingly leading the table.

Atletico Madrid on the other hand are the team in the best form in La Liga at the moment. Diego Simeone is in a run of five consecutive wins in the league. In the previous round Atletico enjoyed a 4-0 win over Leganes at home, proving that they will fight for the title until the very end of the campaign.

This is going to be an exciting game between two very good teams, filled with brilliant players. Lionel Messi and Luis Suarez will look for goals for Barcelona, while players like Antoine Griezmann and Diego Costa will be in charge in Atletico Madrid’s attack.