After eliminating the current holder of the trophy Real Madrid, now Ajax have another big challenge upon them in the Champions Leauge. The Dutch giants are facing Juventus in a first leg from the 1/4-finals of the competition. Let’s see what’s the situation with these two teams at the moment.

How we said, Ajax made an impressive performance in the previous round of the competition. The Dutch team lost the first leg against Real Madrid with 1-2, but in the second leg at the Santiago Bernabeu Ajax celebrated a fantastic 4-1 win. In this game Erik ten Hag’s boys proved to everyone that they are a team which shall never be underristimated.

Ajax are entering this clash on high spirit after becoming a leader in the Dutch Eredivisie during the weekend. After PSV’s draw against Vitesse and Ajax’s 4-1 win over Willem II, now Ajax are the new leaders in the Dutch league.

Meanwhile Juventus rose from the dead against Atletico Madrid in the 1/8-finals. The Old Lady suffered a 0-2 defeat in the first game at the Wanda Metropolitano, which made the Spanish team a favourite for the rematch. Everything changed in the second leg at the Allianz Stadium, when Cristiano Ronaldo scored an incredible hattrick for Juve and by himself managed to kick Atletico out from the competition. 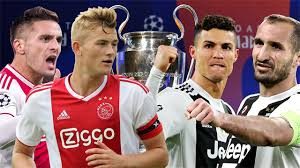 Juventus’ biggest worries for the first leg against Ajax are related to Cristiano Ronaldo’s fitness. The Portuguese striker got injured during a game for the national team and he could miss the first game in Amsterdam. Surely for Juventus this is going to be a huge miss, but players like Paulo Dybala could get another chance to shine.

This is going to be a very interesting clash between Ajax and Juventus from the 1/4-finals of the Champions League. Juve might be a favourite here, but the win against Real Madrid is going to boost Ajax’s confidence.