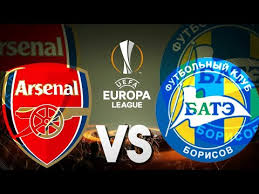 Arsenal welcomes BATE Borisov in a second 1/16-finals leg from the Europa League. Let’s see what’s the situation in this tie between these two teams.

Arsenal were major favourites against BATE, but the first game in Borisov ended with a shocking 1-0 win for the Belarusian team. Nobody really expected that the Gunners could lose this match, but it happened. The home side achieved a terrific and clean win, which gives them some chances to reach the 1/8-finals and eliminate the Londoners.

The central midfielder Stanislau Dragun scored the only goal in the game at the Borisov Arena. This happened in the last minute of the first half, when he used an assist from Igor Stasevich. In the second half Arsenal tried to avoid the loss, but even the inclusion of Pierre-Emerick Aubameyang and Denis Suarez didn’t help the visitors. Things got worse for Arsenal five minutes before the end, when the French striker Alexandre Lacazette was sent off. The former Olympique Lyonnais forward won’t be avaliable for the second leg at the Emirates.

Unai Emery is a manager who won Europa League in three consecutive years with Sevilla. He’s a tactician who knows how to win trophies in Europe. All of the Arsenal fans are hoping that Emery will take them to the big final, but now they must pass this test in order to continue dreaming. BATE will give their best to eliminate the Gunners, but even with a loss in the first leg, Arsenal remain a strong favourite to reach the 1/8-finals.

That’s our opinion on the Europa League 1/16-final clash between Arsenal and BATE Borisov at the Emirates on Thursday night. The result from the first leg was shocking, but now the Gunners have a good chance to fix their mistake