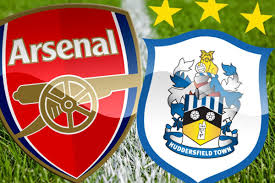 Arsenal welcomes Huddersfield Town in a game from the 16th round of the English Premier League. This match is going to be played on Saturday afternoon at the Emirates Stadium in London.

Arsenal are currently 5th in the Premier League with 31 points and a record of 9 wins, 4 draws and 2 losses. The Gunners are unbeaten since the 2nd round of the league, when they lost against Chelsea. Right now Unai Emery’s team have a record of 9 wins, 4 draws and 2 defeats. In their last five games the Gunners won twice and made three draws. At this moment Arsenal are on par with the 4th Chelsea – both teams have the same amount of points, but Chelsea’s goal difference is currently better.

In their last match Arsenal made a 2-2 draw during the visit to Manchester United at the Old Trafford. Twice in the game the Gunners got a lead in the scoreline, thanks to a goal from Shkodran Mustafi and an own goal from Marcos Rojo. But United managed to win a point, thanks to goals from Anthony Martial and Jessie Lingard.

Huddersfield Town are currently fighting for their survival in the league. Right now they are 17th in the league standings with 10 points, being just one point above the 18th Southampton and the relegation zone. In their last five games Huddersfield won twice, lost twice and made one draw.

In their last fixture David Wagner’s boys conceded a 1-2 loss during the visit to Bournemouth. Terence Kongolo scored Huddersfield’s only goal in the match, which was not enough for at least a point.

These are our thoughts about the Premier League clash between Arsenal and Huddersfield Town at the Emirates Stadium. Whatever you have decided about this one, we wish you good luck!