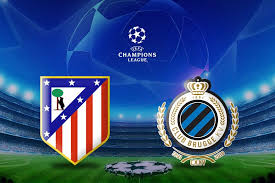 Atletico Madrid welcomes Club Brugge in a match from Group A of the UEFA Champions League. Let’s take a look at this clash at the Wanda Metropolitano in the Spanish capital.

Atletico started their participation in the Champions League just like they hoped to – with a win. The Rojiblancos beat Monaco with 2-1 away from home, thanks to goals from Diego Costa and Jose Gimenez. For Atletico was very important to start with a win, because they still remember what happened in the group stage during the previous season of the competition.

Surely Atletico Madrid are a team that once again will try to reach the final of the competition. They already did it twice in the last five years. Sadly for them, they lost both times against Real Madrid. Their quest for a first Champions League trophy continues.

In La Liga Atletico are also doing well. They are just 2 points behind the leaders Barcelona and Real Madrid, being 4th in the league standings. They are currently unbeaten in four consecutive games. In their last match Atletico won a point during the visit to Real Madrid at the Bernabeu.

Club Brugge suffered a defeat in their opening game in the Champions League, losing against Borussia Dortmund at home. Of course, there’s nothing shocking about that, because Club Brugge are regarded as the underdogs in this group. But it doesn’t mean that they are not hoping to win some points in the competition.

In the Belgian First Division A Club Brugge are leaders with 25 points won so far from 9 games played, being on 2 points ahead of Genk. They have won 8 of their 9 matches played so far, which tells us a lot about their quality.

That’s what we had to say about the La Liga clash between Atletico Madrid and Club Brugge. Good luck!