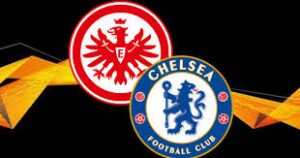 Eintracht Frankfurt hosts Chelsea in a first game between these two sides from the 1/2-finals of Europa League. Let’s examine this clash at the Commerzbank-Arena in the city of Frankfurt am Main.

Eintracht are having an impressive Europa League campaign so far. The German team performed very well during the group stages and continued in this way during the knockout phase as well. Nobody is going to be really surprised if they reach the final in May.

During the 1/4-finals Eintracht had a really intense tie against Benfica. In the first game in Lisboa the German side played with a man less on the pitch and suffered a 2-4 defeat. In the second eg it was all different though, because Adi Hutter’s team enjoyed a 2-0 win at home and eliminated the Portuguese giants.

Meanwhile Chelsea won all of their last 6 games in Europa League since the beginning of the knockout phase of the competition. Since the group stages ended, Maurizio Sarri’s boys are just perfect and very dominating.

In the 1/4-finals Chelsea met Slavia Praha and once again won both games – 1-0 in Prague and 4-3 in London. The Blues are aware that if they don’t finish in the Top 4 of the Premier League, winning Europa League could be the only way they qualify for the next edition of the Champions League.

So far in the tournament Maurizio Sarri was picking a pretty much different starting line-up in Europa League, but being so close to the final now, it won’t be surprise if Sarri picks his best starting eleven. The level of the opposition here is also higher, because Eintracht have been one of the best teams in the competition so far.

We expect a pretty much a great game between Eintracht Frankfurt and Chelsea on German soil. These two sides will want to win.