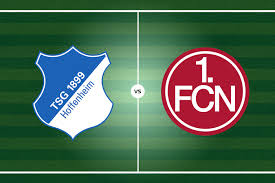 Hoffenheim hosts Nurnberg in a match from the 25th round of the Bundesliga. Let’s take a minute to examine this clash on Sunday afternoon.

At this moment Hoffenheim are 9th in the Bundesliga standings with 34 points. Hoffe have a solid team, but at some moments they are underperforming a little bit. But they still have chances to climb up in the table and qualify for the European competitions. What they need is to find a better consistency in their performance.

Speaking about consistency, Hoffenheim won just one of their last five matches – against Hannover 96. They also made three draws and suffered one loss. This is what the manager Julian Nagelsmann have to change – the consistency of his players. It needs to be better.

In their last game Hoffe suffered a loss. They travelled to Frankfurt to meet Eintracht, but suffered a 2-3 defeat. Joelinton and Belfodil scored for the visitors, but Eintracht won the game with a winning game in the 96th minute. It was really dissapointing for Hoffenheim.

Nurnberg on the other hand are in a deep trouble. The team is 18th in the league with just 13 poitns won so far. If Nurnberg don’t start winning points as soon as possible, they are doomed. They won’t have chances to survive.

In their last five matches in the league Nurnberg won just two points. The team’s last game in the league ended with a 0-1 defeat at home against RB Leipzig. Right now Nurnberg are 6 points behind the 16th Stuttgart and the relegation playoff zone. Maybe they still have some chances to survive, but only if they change the way they perform.

These are our thoughts about the Bundesliga clash between Hoffenheim and Nurnberg from the 25th round of the league. We wish you good luck.