Malmo FF welcomes Chelsea in a first match from the 1/16-finals of the Europa League. This game on Swedish soil will be played on Thursday night. Let’s take a look.

Malmo won the right to reach the 1/16-finals of the Europa League after finishing 2nd in Group I of the competition. The Swedish team was beaten by Genk for the first place, leaving Besiktas and Sarpsborg 08 behind them. Malmo ended their participation in the group with 9 points won and a record of 2 wins, 3 draws and 1 defeat.

The season in the Swedish Allsvenskan is yet about to begin, which means that Malmo are lacking some match fitness at the moment. Most certainly it won’t be easy for the Scandinavians against a team like Chelsea.

Chelsea didn’t have a problem to reach the 1/16-finals of the Europa League, just as expected. The Blues will try to win the competition again, which would guarantee them a place in the Champions League next season, no matter how their season in the Premier League ends. 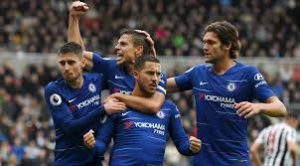 . The Italian tactician was close to being sacked after the humilating 0-6 defeat against Manchester City in the Premier League on Sunday. Despite of this brutal defeat at the Etihad, Chelsea’s board decided to continue with Sarri. There was some information that his assistent Gianfranco Zola could replace him on this position until the end of the season.

In conclusion we can say that this is a delicate moment for Chelsea and their manager Sarri. The Italian manager needs a solid performance from his team in order to keep his job and continue with his sporting project at the Stamford Bridge. The first step towards this goal is beating Malmo in Europa League.