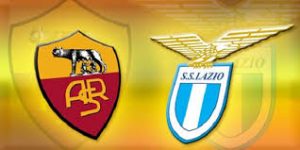 Roma hosts Lazio in the big derby of the capital in the Italian Serie A. This is a match from the 13th round of the league and it’s going to be played at the Stadio Olimpico in Rome.

Both teams are performing strong since the start of the new season, being positioned in the Top 5 of the Serie A. Their major goal is a qualification for the next edition of the Champions League and they are both performing well so far.

Roma are currently 5th in the Serie A with 27 points won so far. Their record in the league is nine wins and two losses. Is this the time for Roma to make their first draw this season? We shall see.

Right now the Wolves are enjoying a great run of four consecutive wins in the Serie A. In their last game Roma enjoyed a terrific 4-2 win over Fiorentina in Florence. It was a good for them to prepare for the big derby against Lazio on Saturday.

Lazio are 4th in the Serie A with just one point more than Roma – 28. Their record in the league is nine wins, one draw and one loss. Right now Lazio are flying high, because they are enjoying a run of five consecutive wins in the league. In the last round Lazio scored five goals against Benevento for a 5-1 win away from home.

Let’s have a look at the team news before the match.

Roma are without the heavy injured Rick Karsdorp, while Radja Nainggolan, Patrik Schick and Bruno Peres are all doubtful for the big test against Lazio.

As for Lazio, the manager Simone Inzaghi can’t use the injured Felipe Caicedo, while Ivan Vargic, Thomas Strakosha, Davide Di Gennaro and Wallace are doubtful. The good news come from the recovery of the Brazilian midfielder Felipe Anderson.