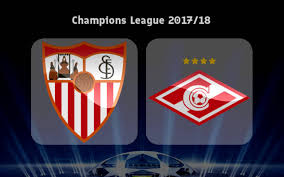 Just two weeks ago these two sides met in Moscow and Sevilla suffered one of the most humilating defeats in their European history in the recent years. Eduardo Berizzo’s team was beaten with 1-5 by the Russian champion, which also sent the Spaniards to 3rd place in the group.

It was a shocking performance from a team who was labeled as favourite before the game. Most of the pundits expected Sevilla to continue their unbeaten run in the group, but what happened shocked everyone. Spartak managed to outplay Sevilla in every aspect of the game, being merciless in front of goal.

Now Sevilla are motivated to bounce back and defend their honour. They also need to win, because there are three teams in this group who are fighting for the first two places – Liverpool, Spartak Moscow and Sevilla. And the difference between the first and the third place is just one point.

For Spartak Moscow the valid question is – can they do something like this again? Especially away from home? Everyone knows how difficult it is to play at Seville. This is a hostile ground for the visiting teams and you can be sure that Spartak won’t feel comfortable there. But their great win over Sevilla in Moscow is giving them enough confidence to make another great performance.

In the Spanish La Liga Sevilla are currently 5th in the standings, being on 9 points behind the leader Barcelona. In their last game they beat Leganes at home, but before that they suffered two consecutive defeats.

In the Russian Premier League the champion Spartak is 6th in the standings, being on 10 points behind the leader Lokomotiv. In their last game the champions made a 2-2 draw against Rostov.