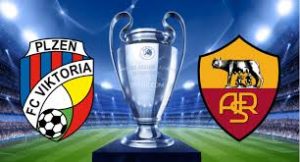 In a game from Group G of the Champions League, Viktoria Pilzen hosts Roma. Let’s take a look at this clash in the city of Pilzen, Czech Republic.

In their previous game Viktoria celebrated their first win in the Champions League this season, beating CSKA Moscow with 2-1 in the Russian capital. Roman Prochazka and Lukas Hejda scored for the Czech team, while Vlasic’ goal for CSKA was not enough for the Russian.

Roma will finish second in this group. The Italian team have 9 points won so far. The Wolves lost their chances to win the group, losing with 0-2 against Real Madrid at the Olimpico in the previous round. So far Roma have 3 wins and 2 defeats in this group.

When Viktoria Pilzen and Roma met in Rome in October, Eusebio Di Francesco’s boys achieved a terrific 5-0 win at the Olimpico. Edin Dzeko scored a hattrick for Roma, while Justin Kluivert and Cengiz Under also put the ball behind Matus Kozacik’s back.

That’s what we had to say about the Champions League battle between Viktoria Pilzen and Roma. This game is much more important for the Czech team, because they are playing for the third place in the group. As for Roma, this game do not mean anything for them.