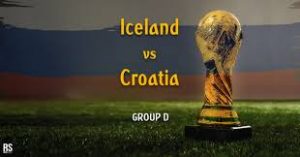 Iceland faces the leader Croatia in a match from Group D of the FIFA World Cup. This clash is going to be played at the Rostov Arena in Rostov-na-Donu. Let’s take a look at this match, which is important for the final outcome in this group.

Iceland have won just one point in their first two games at the World Cup – in their opening match against Argentina. In their second game they suffered a 0-2 defeat against Nigeria, which puts the Vikings in a difficult situation before the third round of the group stage.

Iceland still have a chance to qualify for the 1/8-finals of the World Cup, but this chance is really slim. The Vikings shall hope that they are going to beat Croatia with at least three goals of difference and in same time Nigeria shall not win against Argentina. As you can see, in this case Iceland’s chances of qualifying for the 1/8-finals are pretty slim. But they can still play for their own honour in this final third round of the group stage. This is Iceland’s first ever participation at the World Cup and they are looking for their first win.

Croatia proved that they are the best team in this group. By far. The Balkan team have 6 points from the first two matches in the group and a goal difference of 5-0. In the previous round Croatia humilated the two time world champion Argentina, beating Albiceleste with 3-0. If they continue to play like this, the Croatians would be a major contender for something more at the World Cup. They have an incredibly talented team, filled with world class players. Maybe this is their moment to shine?

Iceland have some problems in their squad before the game. The central defender Ragnar Sigurdsson is recovering from an injury, which he recieved during the loss against Nigeria. Meanwhile the winger Johann Gudmundsson was unable to play against the Super Eagles, because of a muscle problem. He’s doubtful for the match and more likely he’s not going to be in the starting eleven.

Croatia’s manager Zlatko Dalic could make some changes in his team, after his team already qualified for the 1/8-finals. The Croatian team have a strong bench, so it won’t be a problem if some of the starters get a rest. Against Argentina Dalic put the striker Andrej Kramaric on the bench, so now he could return in the team. Meanwhile players like Rakitic, Rabic, Vrsaljko, Mandzukic and Brozovic are just one yellow card away from suspension. Because of this, most likely they are going to be benched against Iceland.

This is our take on the game between Iceland and Croatia from Group D of the World Cup. We expect to see many changes in the Croatian team, which already qualified for the 1/8-finals. But in same time the manager Zlatko Dalic have a strong bench, so we don’t think that their performance will be influenced that much by the changes. Croatia are the favourites here, but don’t underrestimate Iceland.