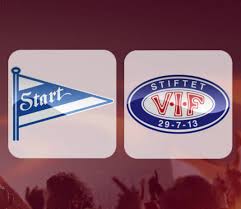 Start faces Strømsgodset in a game from the 13th round of the Norwegian Eliteserien. Let us have a look at this match.

Start are currently in the relegation zone of the Eliteserien, being 15th in the league with just 7 points won so far. The team’s record since the beginning of the season shows 2 wins, 1 draw and 9 defeats. For sure this is not what they hoped for before the beginning of the campaign, but it is what it is. Now they have to regroup and try to do better in the coming weeks.

In their last five matches Start won once – against Bodo / Glimt and suffered four defeats. Including against Molde away from home in the last round. Aremu Afeez scored a goal for Start, but Molde scored three and clinched a 3-1 win at home.

Right now Start are in a truly delicate situation and they need to get back on their feet as soon as possible, if they want to have chances to survive. Because as it looks now, surviving is going to be their priority this season.

Strømsgodset on the other hand are 12th in the league standings at this moment. They have 12 points and a record of 3 wins, 3 draws and 6 defeats. In their last five games Strømsgodset won once – against Sandefjord, made one draw and suffered three defeats.

In the previous round Strømsgodset enjoyed a win. They hosted Sandefjord and celebrated a 2-0 win at home. Marcus Pedersen and Amahi Pellegrino scored the winning goals for the home team, who managed to achieve a very important win.

The truth is that even on away ground, Strømsgodset are a slight favourite against Start. Mainly because Start’s complicated situation and their bad shape at the moment. Let’s see what’s going to happen.