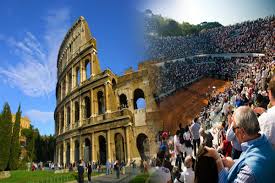 Rafael Nadal versus Alexander Zverev is the final of the ATP 1000 tournament in the Italian capital Rome.

The world number one Rafael Nadal is heading towards another Masters title on clay. The El Matador had a rest in the first round, before beating Damir Dzumhur with 6-1 6-0 in the second round.

In the third round Nadal faced the Canadian Denis Shapovalov and achieved another win in two sets – 6-4 6-1.

For a first time Rafa lost a set against the Italian Fabio Fognini. These two met during the 1/4-final and the Spaniard enjoyed a difficult, but sweet win with 4-6 6-1 6-2.

In the 1/2-finals we had another round of the tennis classic between Rafael Nadal and Novak Djokovic. These two played some great tennis, but the winner was only one – Rafa Nadal. The world number 1 enjoyed a 7-6(4) 6-3 win and qualified for the final.

His opponent in the final is going to be Alexander Zverev.

The young German also rested in the first round. In the second round Zverev faced Matteo Berrettini from Italy and enjoyed a 7-5 6-2 win to reach the third round. His opponent there was the Brit Kyle Edmund, against whom Zverev once again won in two sets – 7-5 7-6(11).

To reach the final against Nadal, Alex Zverev had to beat the number 9 in the draw David Goffin. It was a tough match for the talented German, but he successfully achieved a win against the Belgian – 6-4 3-6 6-3.

So far Rafa Nadal and Alex Zverev had faced each other four times and the balance is for Rafa – 4-0 win. But how we know, there’s always a first time for everything. Can Zverev win this time?