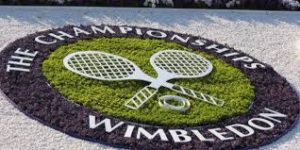 The great Roger Federer is on the brink of reaching another final at his favourite tournament – Wimbledon. The Swiss phenomenon will face Czech Repubic’s Tomas Berdych in the second semifinal of the most prestigious Grand Slam tournament.

If he wins Wimbledon this year, this is going to be the 8th time Roger Federer triumphs in London. It’s also going to be his 19th Grand Slam title, which means that he’s going to improve his own record in this regard. He could also win his second Grand Slam title for the yearl, after already winning Australian Open.

If Roger Federer wins Wimbledon, he will once again enter the history books as the oldest champion ever at All England Club.

But he needs to make two more steps to achieve his goal. And the first step is beating the №11 seeded Tomas Berdych. Czech Republic’s best tennis player reached the semifinals after beating Novak Djokovic in the quarterfinals. But “beating” is maybe not the most correct word here as Djokovic retired in the second set because of an injury.

Before the match with Djokovic, Berdych eliminated the №8 seeded Dominic Thiem in the 1/8-finals. Everyone expected a competitive match between these two players and we got it. It took Berdych five sets to eliminate Thiem, beating him with 6-3 6-7 6-3 3-6 6-3. It was a very competitive tennis duel, but the more experienced Berdych prevailed.

Before that he beat David Ferrer, Ryan Harrison and Jeremy Chardy.

Roger Federer and Tomas Berdych know each other very well. They have played 24 times against each other. The balance is Federer’s favour – 18 wins to 6 six wins for Berdych. But we should note that the last time when they met on Wimbledon – in 2010, Berdych was the winner after a sensational 3-1 win. Is now the time for Federer to avenge this loss? We shall see!